The English Department & Southern Studies is hosting the poet Frank X Walker for the SouthTalks lecture series on February 17.
Multidisciplinary artist Frank X Walker is a native of Danville, KY, a graduate of the University of Kentucky, and completed an MFA in Writing at Spalding University in May 2003. He has lectured, conducted workshops, read poetry and exhibited at over 300 national conferences and universities. A founding member of the Affrilachian Poets, he is the editor of America! What’s My Name? The “Other” Poets Unfurl the Flag (Wind Publications, 2007) and Eclipsing a Nappy New Millennium and the author of four poetry collections: When Winter Come: the Ascension of York (University Press of Kentucky, 2008); Black Box (Old Cove Press, 2005); Buffalo Dance: the Journey of York (University Press of Kentucky, 2003), winner of the 35th Annual Lillian Smith Book Award; and Affrilachia (Old Cove Press, 2000), a Kentucky Public Librarians’ Choice Award nominee.

Born in Detroit, Michigan in 1950, poet, teacher and activist Carolyn Forché has witnessed, thought about, and put into poetry some of the most devastating events of twentieth-century world history. According to Joyce Carol Oates in the New York Times Book Review, Forché’s ability to wed the “political” with the “personal” places her in the company of such poets as Pablo Neruda, Philip Levine, and Denise Levertov.

Maurice Carlos Ruffin is the author of We Cast a Shadow, which was published by One World Random House. The novel is a New York Times Editor’s Choice. Ruffin is the winner of several literary prizes, including the Iowa Review Award in fiction and the William Faulkner–William Wisdom Creative Writing Competition Award for Novel-in-Progress. His work has appeared in the Oxford American, Garden & Gun, and Kenyon Review. A New Orleans native, Ruffin is a professor of Creative Writing at Louisiana State University, and the 2020-2021 John and Renee Grisham Writer-in-Residence at Ole Miss.

Petra Kuppers is an internationally active disability culture activist, and a community performance artist. She creates participatory community performance environments that think/feel into public space, tenderness, site-specific art, access and experimentation. Petra grounds herself in disability culture methods, and uses ecosomatics, performance, and speculative writing to engage audiences toward more socially just and enjoyable futures.  Petra received the American Society for Theatre Research’s best dance/theatre book award, the National Women’s Caucus for the Arts’ Award for Arts and Activism, and her performance poetry collection Gut Botany was named one of the top ten US poetry books of 2020 by the New York Public Library. She teaches at the University of Michigan, Ann Arbor, and on the low-residency MFA in Interdisciplinary Arts at Goddard College. Her next academic book project, Eco Soma: Speculative Performance Encounters, will appear with the University of Minnesota Press in early 2022. She is a current Black Earth Institute fellow.

Eduardo C. Corral earned degrees from Arizona State University and the University of Iowa Writers’ Workshop. His debut collection of poetry, Slow Lightning (2012), won the Yale Younger Poets Prize, making him the first Latino recipient of the award. His second collection is Guillotine (2020). Praised for his seamless blending of English and Spanish, tender treatment of history, and careful exploration of sexuality, Corral has received numerous honors and awards, including the Discovery/The Nation Award, the J. Howard and Barbara M.J. Wood Prize, a Whiting Writers’ Award, and a fellowship from the National Endowment for the Arts.

New York Times best-selling author Tayari Jones is the author of four novels,most recently An American Marriage. Published in 2018, An American Marriageis an Oprah’s Book Club Selection and also appeared on Barack Obama’s summer reading list as well as his year-end roundup. The novel was awarded the Women’s Prize for Fiction (formerly known as the Orange Prize), Aspen Words Prize and an NAACP Image Award. It has been published in two dozen countries.

Jones, a member of the Fellowship of Southern Writers, has also been a recipient of the Hurston/Wright Legacy Award, United States Artist Fellowship, NEA Fellowship, and Radcliffe Institute Bunting Fellowship. Her third novel, Silver Sparrow, was added to the NEA Big Read Library of classics in 2016.

Jones is a graduate of Spelman College, University of Iowa, and Arizona State University. She is an Andrew D. White Professor-at-Large at Cornell University and the Charles Howard Candler Professor of Creative Writing at Emory University.

Molly Mcully Brown is the author of the poetry collection The Virginia State Colony For Epileptics and Feebleminded (Persea Books) which won the 2016 Lexi Rudnitsky First Book Prize and was named a New York Times Critics Top Book of 2017, and the forthcoming essay collection Places I’ve Taken My Body.

They will give a zoom on “what agents want” and then give quick individual zoom consultations with MFA students the next day.

Paisley Rekdal  is the author of a book of essays, The Night My Mother Met Bruce Lee;  the hybrid photo-text memoir, Intimate; and five books of poetry: A Crash of Rhinos; Six Girls Without Pants; The Invention of the Kaleidoscope; Animal Eye, a finalist for the 2013 Kingsley Tufts Prize and winner of the UNT Rilke Prize; and Imaginary Vessels, finalist for the 2018 Kingsley Tufts Prize and the Washington State Book Award. Her newest work of nonfiction is a book-length essay, The Broken Country: On Trauma, a Crime, and the Continuing Legacy of Vietnam. A new collection of poems, Nightingale, which re-writes many of the myths in Ovid’s The Metamorphoses, was published spring 2019.  Appropriate: A Provocation, which examines cultural appropriation, is forthcoming from W.W. Norton in Feb. 2021.  She is the guest editor for Best American Poetry 2020.

Kaitlyn Greenidge’s debut novel is We Love You, Charlie Freeman (Algonquin Books), one of the New York Times Critics’ Top 10 Books of 2016. Her writing has appeared in the Vogue, Glamour, the Wall Street Journal, Elle.com, Buzzfeed, Transition Magazine, Virginia Quarterly Review, The Believer, American Short Fiction and other places.

Michael Farris Smith is an award-winning writer whose novels have appeared on Best of the Year lists with Esquire, Southern Living, Book Riot, and numerous others, and have been named Indie Next List, Barnes & Noble Discover, and Amazon Best of the Month selections. He has been a finalist for the Southern Book Prize, the Gold Dagger Award in the UK, and the Grand Prix des Lectrices in France, and his essays have appeared with The New York Times, Bitter Southerner, Garden & Gun, and more. He lives in Oxford, Mississippi, with his wife and daughters. 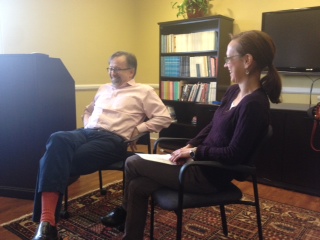 We also bring in agents and editors to conference with our students. Thank you to Dan Conaway of The Writer’s House in NYC, pictured here being interviewed by one of his writers, Megan Abbot, about how writers and agents work together. Previous years we welcomed Lisa Gallagher of Sanford J. Greenburg and Stella Connell of the Stella Connell Agency.