It is with great joy that we announce the 2015-2016 Grisham Writer-in-Residence: Kiese Laymon! 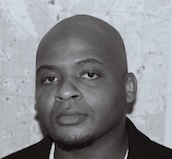 Kiese Laymon, who was born and raised in Mississippi, is a professor of English and Africana Studies at Vassar College.  Author of Long Division and How to Slowly Kill Yourself and Others in America, Laymon’s work deals with American racism, feminism, family, Hip-hop and Southern black life. Long Division was named one of the Best of 2013 by a number of publications, including Buzzfeed, The Believer, Salon, Guernica, Mosaic Magazine, Chicago Tribune and the Crunk Feminist Collective. It was also short-listed for the Saroyan International Writing Award. Three essays in “How to Slowly Kill Yourself and Others in America” have been included in the Best American series, the Best of Net award, and the Atlantic’s Best Essays of 2013. Laymon has written essays and stories for numerous online publications, including his work as a contributing editor at Gawker and frequent posts to ESPN.com.  His website is http://kieselaymon.com/